The Amsterdam Red Light District is a very special area in the heart of the city - the best known and most popular attraction of Amsterdam. The local people call this “the Wallen” . It stretches out onto several blocks, is crossed by canals and alleys, and right in the old center is the place where the oldest profession is practiced daily and legal. There are more than 300 windows, most of them romantically lit with red lights and in each window you can see nearly naked women selling themselves to the tourists and locals. 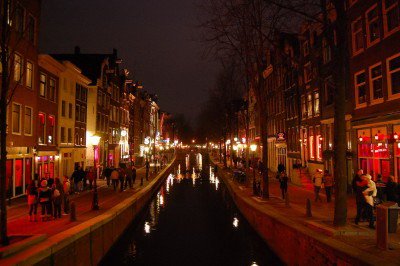 Walking the streets of the Red Light District in Amsterdam is a very special experience. The narrow city streets are crowded with people, gawking at the ladies in the windows. All these red lights and the amount of windows, all these ladies and men walking in and out… You don’t know how or what to feel; embarrassed, impressed, uncomfortable or free. Whatever you feel , you will never forget this attraction.

While it's safe enough to walk around the area alone, Amsterdam Red Light District tours offer  time with a group of like-minded tourists and a professional tour guide who knows all the best, naughtiest places! There are many great tours of the area.

When to visit the Red Light District?

The best time to visit the Amsterdam Red Light District is in the early evening when you can see the romantic red lights and it is not too crowded yet. You are not allowed to take photos of the women in the windows, so best thing to do is to put away your camera for safety reasons and just enjoy these eye candies!

The Netherlands hold an open and practical minded spirit towards soft-drugs and sex. They try to regulate, rather than forbid the sale and trade. These laws are not very popular with adjacent countries and they fight about it, because it supports trade at the border.

Also in Amsterdam itself there are more and more actions from law enforcers to close a big part of these windows, because of problems with human trafficking.

Where is the Amsterdam Red Light District?

What else is there to do and find?

Other popular attractions of the Amsterdam Red Lights District are: