If you are arriving at Amsterdam's airport or train station, or leaving the city - you are much better off using a specifically designated arrival/departure transfer than any public transport. Many hotels offer shuttles to and from the airport, just ask them. However, if you want to go on your own, you can scroll down to the information on how to get to Amsterdam center from Schiphol Airport by public transport.

Let's take a look at the most popular and convenient ways to use Amsterdam public transport.

best way to get around amsterdam

Amsterdam public transport is considered quite convenient and easy to use - however, everyone chooses a different way of getting around Amsterdam based on the purpose of your trip. Spoiler: If you are located in the center of Amsterdam, be ready to walk a lot!

Have you booked a central hotel in Amsterdam, or do you need to commute to see most of the tourist places in Amsterdam? Are you planning to visit Amsterdam museums and top attractions? How many days are you spending in Amsterdam? Below you will find a few excellent options of Amsterdam transport cards, city pass variations and useful tips on using Amsterdam public transport system.

Unlimited use of Amsterdam Public Transport

Here are the most popular and cheapest ways of getting around Amsterdam. First of all, there are two kinds of unlimited public transport cards that don't include any other add-ons, just free commute in Amsterdam.

OV-chipkaart for public transport in netherlands

The OV-chipkaart is a public transportation card used by local Dutch, it's convenient and easy to use because it eliminates a need to purchase single tickets. You can buy OV-chipkaart at the airport, Central Station, various supermarkets and other pick up points. In addition to a traditional hard plastic card, you can now pay with a contactless debit/credit card, or your phone! You just load some credit onto the OV card, and then use it on trams, buses and metro, as well as trains (NS, Splinter etc). Recommended credit amount is €7.50, and you can choose between pay-per-distance or onboarding fee while using public transport in Amsterdam. Click on this link to read more about OV-chipkaart fares.

Tip: For transit around the city, get an anonymous OV-chipkaart - it is not tied to a certain person and it's valid for five years. You can transfer it to another person, or use it next time when you visit Amsterdam!

GVB Public Transport pass is valid for: 24h, 48h, 72h, 96h, 120h, 144h, or 168h, meaning one to seven days. Pickup is available at one of the GVB Ticket offices, including one at Stationplein, just outside of Centraal Station in Amsterdam.

Disadvantages: despite there is GVB transport app you can download with maps and transport schedule, the reviews are really frustrating, and it seems like getting a real card is much better.

The I Amsterdam City Card is definitely the most popular option of getting around Amsterdam among tourists. It includes unlimited use of all the  public transport in Amsterdam (metro, tram, bus) plus a free canal cruise, free 24hrs bike rental, free admissions to top Amsterdam museums, free attractions in Amsterdam, Haarlem, Zaanse Schans, Volendam etc and more!

There is an I Amsterdam City Card app that is very convenient to use for both commuting around Amsterdam, and entrance to museums. Make sure to book your visit through the app as many museums require to reserve a time slot due to their capacity limits.

Fun fact: I Amsterdam City Card was literally designed for Amsterdam tourists by the city! It is valid for 24hrs, 48hrs, 72hrs, 96hrs or 120hrs - accordingly, you can use it for one, two, three, four or five days in a row. That's the most popular length of tourist vacation in Amsterdam, allowing you to get the most out of your visit. And if you add popular destinations around Amsterdam that are also free with I Amsterdam Card - you get a winning travel card with lots of savings.

You may hear about additional Amsterdam travel card options, let's take a look at three other travel passes. These are less popular than OV-chipkaart, GVB travel pass and I Amsterdam City Card, however, you might need them for other travel purposes.

how to use Amsterdam Trams And Buses 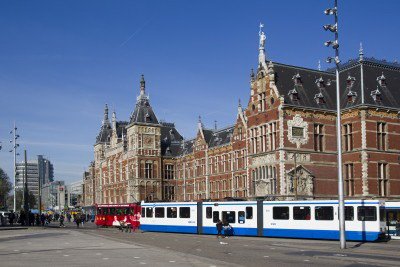 The trams are a popular kind of Amsterdam public transport. They are a bit old-fashioned with their bells and wobbly way of going through the streets, but they go pretty fast and from the windows you can see enjoy the view of beautiful Amsterdam streets.

Traveling by tram is quite easy. Buy your ticket, transport pass or I Amsterdam City Card and check yourself in and out when boarding and disembarking with the yellow pay machines which you find on every station. You then enter the tram at the front and exit at one of the other doors (push the button to open the door). All trams and buses have a number on the front and side of the tram, so you know which line this is, and in the front you can read its destination, so you know if you will go to the right direction.

Make sure to pick up an Amsterdam public transport map so you can check which line you need in which direction. For your convenience we made a printable map with all the metro/tram and bus routes on it. Click on the map below, and you will get a PDF file to download and print for free. 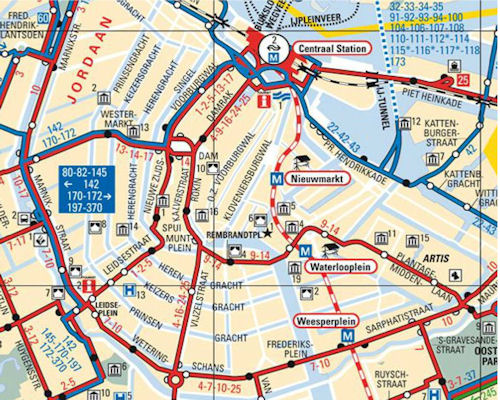 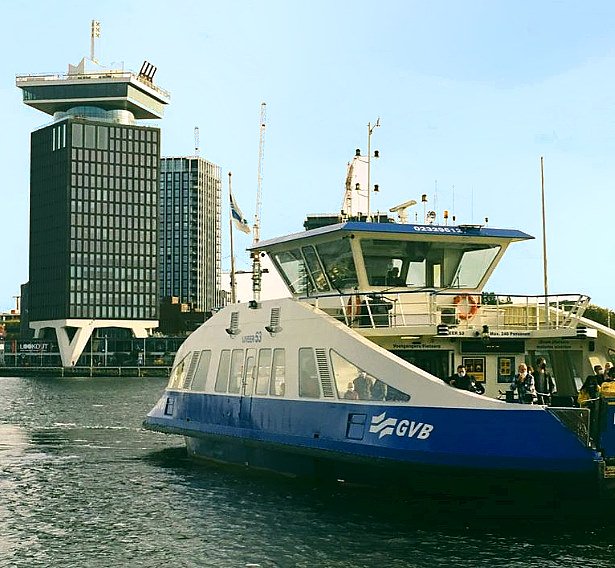 Probably one of the best ways to see Amsterdam from water is to jump on a free ferry! GVB public transport system in Amsterdam includes a fleet of 13 GVB ferries that bring passengers and bikes from one shore to another for free. 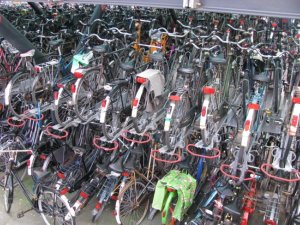 As soon as you come to Amsterdam, you will notice a lot of bikes. Biking is a very comfortable and popular way of getting around the city. Locals are literally living on wheels - they transport everything on bikes: groceries, children, dogs, you name it. Rain is not an issue - just wear a rain jacket!

Biking around is one of the best ways to explore Amsterdam.  Renting a bike or doing a guided bike tour is a great way to discover the city and can be an adventure that you will never forget. It allows you to explore Amsterdam in a slow pace, while blending in with the locals at the same time.

Be careful though - bikes are everywhere, and you should be cautious when crossing bike lanes or moving around the streets.