Many Amsterdam tourist attractions are famous worldwide. Who hasn't heard about the Red Light District or the beautiful canals that run around the city? Learn about the best things to see in Amsterdam as well as about popular destinations around the city that you could visit during your vacation! 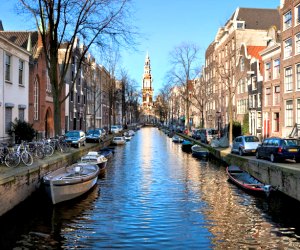 The city is perhaps the most well known for its beautiful and historic canals - the coolest things to see in Amsterdam. The three canal rings in the city top the list of Amsterdam tourist attractions - they are the city's iconic image and a tranquil sight. Around the canals are warehouses and elaborate residences of merchants from the 17th century. Among these, the canals forming the central Canal Belt are the most popular. Connecting the canals throughout the city are innumerable picturesque brides. The large rings are formed by semicircular canals. These are again joined by canals extending from the middle, providing a rough image of wheel with spokes. Amsterdam's canals are listed by UNESCO as World Heritage Sites. Simply wandering around the city and exploring the areas around these historic canals is a great way to learn more about Amsterdam. They are the lifelines of the city and a reminder of the Golden Dutch Age during which these iconic canals as well as the islands had been created. 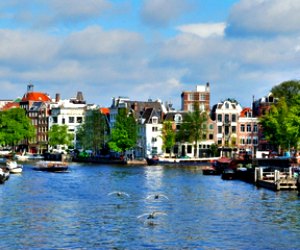 Running through the center of Amsterdam, the Amstel River has played an important role in Amsterdam's history. The city was built around the river and it was after this river that Amsterdam was named. Amstel River is lined with colorful houseboats, impressive mansions and important landmarks. Many important Amsterdan tourist attractions are located along the riverside such as the St. Nicolas church with its beautiful domes, the Stopera opera house and city hall with its glass facade and the Carre theater. Many festivities in Amsterdam are also centered around the river such as the liberation day, Gay Pride Parade with its colorful celebrations and the New Year celebrations with its dazzling light show. Running across the river are several famous bridges like the Skinny Bridge. There are also several museums located along the Amstel River such as Waterlooplein, Amsterdam Museum and Hermitage Museum - some of the must-see places in Amsterdam. 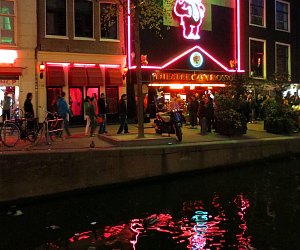 The infamous Red Light District or De Wallen of Amsterdam has always been a popular haunt of tourists in the city. This vibrant, bold and energetic neighborhood is definitely not everyone's cup of tea. However, it is also an area that has some of the best restaurants, shops and bars in Amsterdam. Some of the most beautiful canals in Amsterdam are also located in this area. The Red Light District is one of the most popular Amsterdam tourist attractions - it offers every pleasure a person can wish for. Featuring rows of windows featuring gorgeous girls dressed in provocative lingerie, this area is also a great place for people watching. With its laid back and relaxed atmosphere, this area is inhabited and visited by people of all age groups and all kinds. For great restaurants and shopping, Zeedijk and Warmoesstraat are good places to start. Another major attraction of this neighborhood is its beautiful architecture. 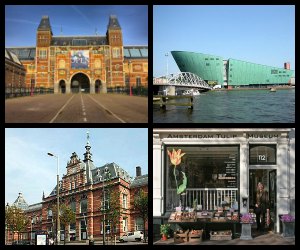 Museums are the integral part of the city and are among the best things to see in Amsterdam. There over 50 of them, and a few museums are among the most popular Amsterdam tourist attractions. Many museums are uniquely found in Amsterdam and are a must to visit during your vacation - such as Anne Frank House, Hash, Marihuana and Hemp, and Sex museum. If you are a visiting family you may opt for the Nemo Museum, which is totally new and updated. The impressive Anne Frank House is an experience you'd never forget. But if you want just to have fun, visit the Madame Tussaud's, the world of wax figures. 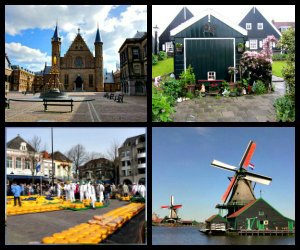 The New Church or Nieuwe Kerk is one of the most prestigious and breathtaking churches of the city and one of the most beautiful Amsterdam tourist attractions. Built in the 15th century originally, the church is located next to the Royal palace on Dam Square. The church was completely destroyed in a fire during the 17th century but was painstakingly restored back to its former glory. It features Gothic and Renaissance architecture style and a striking bell tower. Today it is an exhibition space for many historic and temporary art events. Inside the church is the burial site of several naval heroes like Commodore Jan Van Galen and Michiel de Ruyter. The church is also home to the Royal Crypt. Dutch monarchs have chosen this venue for their inauguration since 1814 including Queen Beatrix. It had also been the site for the marriage ceremony of her heir. Today, Nieuwe Kerk is not only a popular tourist attraction but also an iconic landmark and the bes sights to see in Amsterdam. 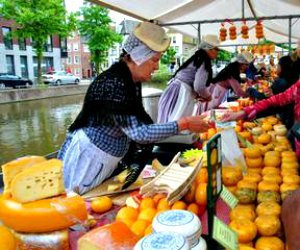 Albert Cuyp Market is the largest outdoor market in Europe. The market has been in existence since the 19th century and has been named after a renowned painter from the 17th century. The market is located in the eclectic De Pijp district on Albert Cuypstraat, only a tram ride away from the center of the city. The noisy, vibrant market has more than 250 stalls where visitors can find almost anything they want. Stall owners trade a variety of electronics, clothing and books as well as fresh fish, vegetables and fruit. The market originally started as a small collection of traders. However, in 1905 the city council took over and organized it into an outdoor market. Since then the Albert Cuyp Market has become one of the must see Amsterdam tourist attractions. It offers a fun way to get an insight into the local life of Amsterdam. 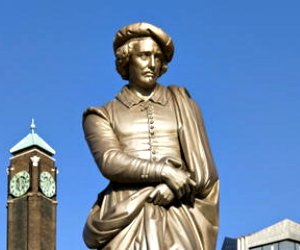 Still wondering what to see in Amsterdam? Located between the Amstel River and Mint Tower, Rembrandtplein is one of the liveliest and busiest squares in the city today. The square had originally been a humble dairy and butter market but has developed into its current state over the years. The plaza itself and its charming streets are lined with several hip bars, music clubs and cafes. Tourists and locals stroll through the area leisurely during the evening hours and enjoy the spectacular views of the skyline from rooftop terraces. Rembrandtplein is at its liveliest during the evenings with popular nightlife destinations like Escape and Club Rain attracting a lot of people. Named after baroque painter Rembrandt Van Rijn, this square is among the liveliest and crowded Amsterdam tourist attractions that has a very vibrant cafe culture. Many of these offer live entertainment. It is also a hub of the gay scene in Amsterdam. For nightlife as well as leisurely strolls, Rembrandplein is definitely one of the best spots in Amsterdam. 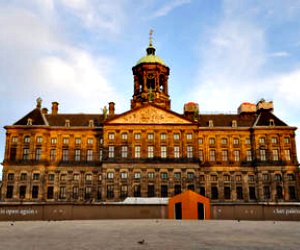 The Royal Palace, or Koninklijk-Paleis in Amsterdam was once called the eighth wonder of the world by Contantijn Huygens, a local poet. It is an impressive structure in the Romanesque architectural style with an iconic statue of Atlas, the Greek titan, on its rooftop. The building was built around 13,500 woolen piles that were sunk in the ground. Featuring luxurious decor and shining marble floors, the Royal Palace had once been the symbol of prestige and power in Amsterdam. It still lives up to that reputation. The main Amsterdam tourist attractions at the palace are its lavish interiors with its collection of ornate carvings, antiques and paintings inspired by Rembrandt. The structure was built originally as the city hall. It was in 1808 that it was transformed to a palace by the King of Holland. Even today the Royal Palace is used by the monarchs for official state visits. 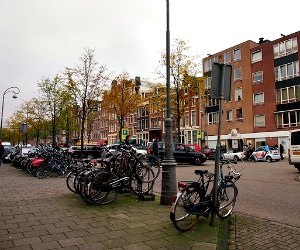 The Jordaan district is one of the most popular and interesting Amsterdam tourist attractions. Located in the heart of the city, it is a colorful, vibrant and bustling area with many specialty shops, art gallery and street markets. It offers visitors plenty of places to visit and things to do, including the Anne Frank House. Visitors can try many local dishes, get acquainted with Dutch culture and shop while they are in the area. It is a central district that has always been proud of its culture and music. Even today there are several statues scattered throughout the area to celebrate local heroes such as Johnny Jordaan, a Dutch patriot. Many music festivals are celebrated in Jordaan. Visitors can also enjoy its lively music scene by visiting its many clubs and bars. These music venues usually feature grunge, punk and alternative music. 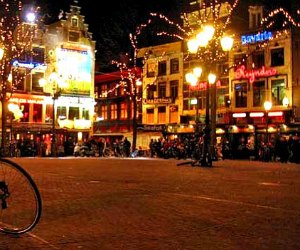 Leidseplien is one of the most popular central squares in Amsterdam. Located opposite Vondelpark and close to the canal ring, it enjoys an enviable location. Located around the Leiden Square are many Amsterdam tourist attractions - landmarks and architectural wonders. The area had originally been used as a transportation hub for horse carriages during the 17th century. The American Hotel with its beautiful Art Deco architecture is located here. the Stadsschouwburg Theater with its neo-Renaissance style architecture is also located in the area. It is a vibrant area with many street entertainers, restaurants, shops and cafes. During the evening hours the place becomes livelier as music venues, Irish pubs and cafes attract a lot of visitors. During the summer months the terraces of cafes are filled with visitors. There are hot snacks and seasonal delicacies available and a large open ice rink during the winter season. 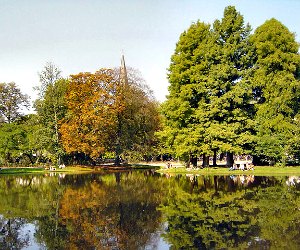 Vondelpark is the largest and the most popular park in Amsterdam, attracting over 10 million tourists each year. Located in the heart of the city close to Amsterdam tourist attractions like the Van Gogh Museum, Stedelijjk Museum, Rijksmuseum and Leidseplien, it is loved by tourists and by locals. It is home to several cafes and restaurants. The park also has an open theater and a skate rental store. The rose garden in Vondelpark has over 70 kinds of roses. Designed by L.D. Zocher, the park has a national heritage title and attracts a lot of people on fine days. Visitors like to watch people, lie on the grass, listen to music, roller-skate, jog, walk or play with dogs in the park. During the summer months there are free concerts in the park. Other attractions in Vondelpark include the historic Pavilion, Groot Melkhuis, the music done and the statue of Vondel. 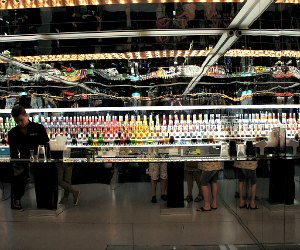 20% off with Amsterdam And Holland Pass

25% off with I amsterdam Card

The House of Bols Cocktail and Genever Experience is one of the coolest Amsterdam tourist attractions that takes visitors on a memorable ride in the world of genever, liqueurs and cocktails. The museum was named after Lucas Bols, the man who founded the first spirit brand in the world in 1575 in Amsterdam. Visitors can learn more about a wide range of genevers and liqueurs at the Museumplein. At the end of this tour they are also served delicious cocktails. The Genever Room and Tasting Hall inside will provide visitors information about 36 different Bols genevers and liqueurs. At the beautiful Mirror Bar the bartenders put together cocktails once the tour ends. Visitors can also learn various bottle flipping bartending trips and tricks at the Flair Booth. Guided tours are available and visitor guides are also available in several different languages. 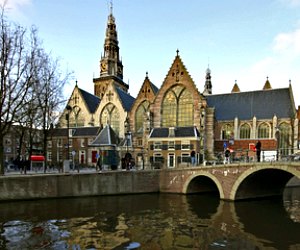 The Old Church or Oude Kerk in Amsterdam is the oldest building of the city, dating back to 1306. Located in view of the infamous Red Light District, it is a Gothic, triple nave church that remains one of the most important buildings of the city and one of popular Amsterdam tourist attractions. The Old Church has a lot to offer to visitors. It has the oldest bell in the city dating back to 1450 and a beautiful Muller organ which is still used today for recitals. The choir stalls feature lively carvings from the 15th century. The church is built on top of a cemetery and therefore the floor is entirely made of gravestones. In all, there are 2,500 graves within the church. Under these over 10,000 local citizens have been buried, many of whom are quite famous. This inncludes Saskia Van Uylenburgh, the first wife of Rembrandt.